I've decided to post the first chapter of my crime novel Cross Road Blues to give folks a taste. The book has received praise from several folks in the crime fiction biz whose opinions I value highly:

"Drugs, murder, a little Voodoo, and the blues -a lot of blues. Troy Smith's got his mojo workin' in this fast moving, atmospheric crime novel set in the blues joints and back alleys of the 1950s. Check it out!"  -Bill Crider


Read the whole book-  Get it here!  Available in trade paperback, coming soon in ebook form 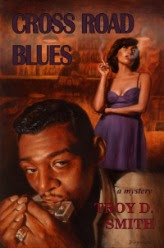 Troy D. Smith
Troy D. Smith was born in the Upper Cumberland region of Tennessee in 1968. He has waxed floors, moved furniture, been a lay preacher, and taught high school and college. He writes in a variety of genres, achieving his earliest successes with westerns -his first published short story appeared in 1995 in Louis L'Amour Western Magazine, and he won the Spur Award in 2001 for the novel Bound for the Promise-Land (being a finalist on two other occasions.) He received his PhD in history from the University of Illinois, and is currently teaching history at Tennessee Tech.